The foggy morning had given way to a brilliant sun. Despite the chill in the air, I could feel sweat starting to bead down my neck as my field assistant and I made our way to a waterhole in the Kanha Tiger Reserve. It was December 2019, and I had just started the fieldwork component of my MSc project. I wanted to identify and examine spatial and temporal patterns in how wild ungulates in Kanha used waterholes: when and where the animals preferred to drink water. The bulk of my data was collected using camera traps.

Walking through the jungle, I was excited. Just two weeks before, I had set up my first batch of camera traps. My plan that day was to retrieve them and see what I had found. For a young researcher like me, it felt like I was walking towards buried treasure.

Camera traps, or trail cameras, typically consist of a camera unit along with a motion sensor. They can be calibrated to take a set number of photos or record videos whenever movement is detected. Once installed, they are capable of passively accumulating timestamped records of wildlife presence in a non-intrusive manner. For my project, I needed to know which species were visiting waterholes for a period of at least two weeks. 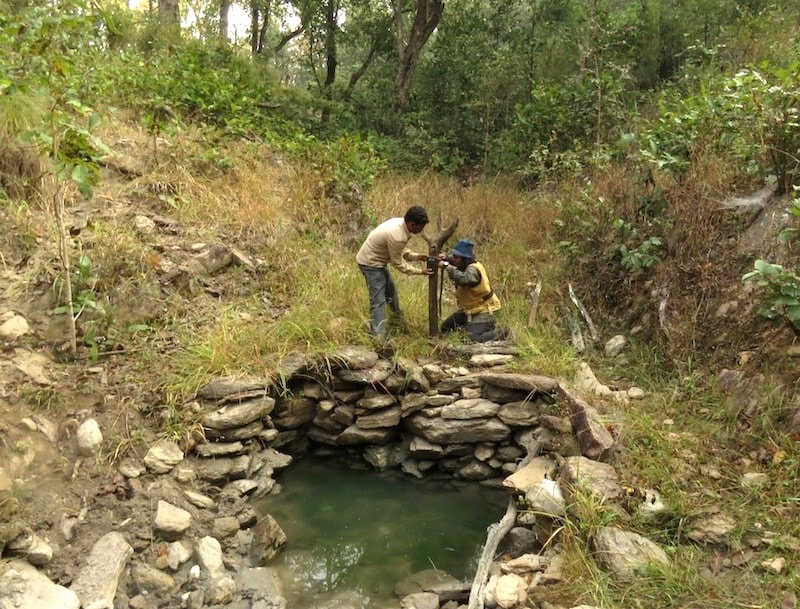 Setting up a camera trap at a watering hole.
Photo Credit: Tara Rajendran

Upon reaching the waterhole, I was relieved to see that my camera traps were intact and more or less pointing in the same direction I had left them in. I have often been asked whether animals notice the camera traps. The device itself is small enough to hold in one hand. While older models are usually equipped with a flash for nighttime, many increasingly feature an array of Infrared LEDs which emit no visible light.

The device is stationary and operates silently. It is quite reasonable to assume that they could go unnoticed by animals. Over the course of my fieldwork, though, I found that this was rarely the case.

Most animals appear to realise when a camera trap has been set. The adult ungulates, namely chital, sambar, barasingha, and wild boar usually came close for a cursory sniff, after which they ignored the traps. The initial inspection usually yielded hilarious selfies, with only an eye, ear or antler visible. The carnivores almost always came and spent a few minutes sniffing around the traps. 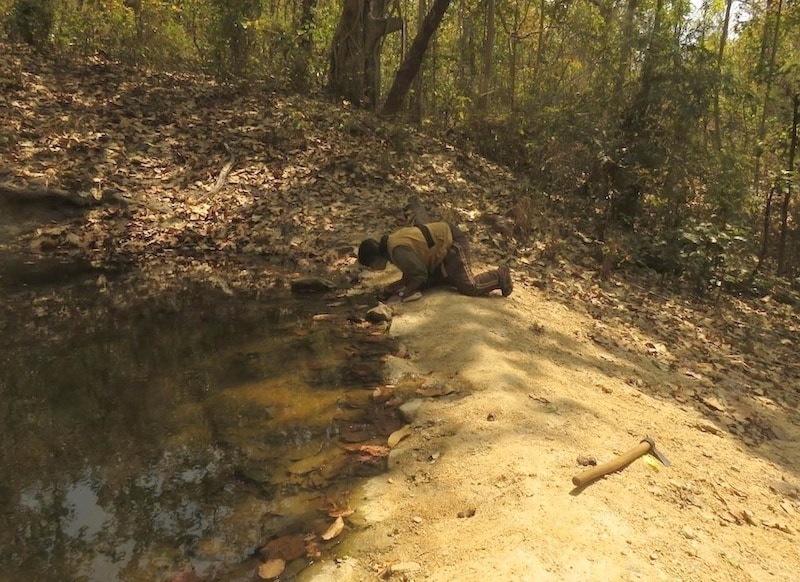 Here I am pretending to be a tiger in order to make sure the camera trap was working. I later went and checked the camera trap to verify that photos were being taken as expected.
Photo Credit: Tara Rajendran

One enterprising tigress thought it was a good idea to scent-mark one of my camera traps. As I was going through the photo records, I could see her approach and rub her cheek against the trap, after which she proceeded to liberally spray her urine all over my trap. Needless to say, the next few photographs were extremely blurry!

Unlike their elders, who were satisfied with a few curious sniffs, tiger cubs engaged in a more thorough inspection by nudging, poking, pushing and even gnawing at the traps. They once chewed up a strap and left the camera trap completely tilted and barely attached to its post.

But the species which gave me the most trouble during fieldwork was a species I was not even studying, the langur. I found that langur troops usually frequented waterholes around noon.

Deep inside the forest, these small pools provided a cool respite from the scorching noontime heat. A troop would stay at a waterhole anywhere between one to two hours, with the adults spread out, resting, grooming and occasionally drinking. During this time, the juveniles would play. Their toys of choice, of course, were my poor camera traps. 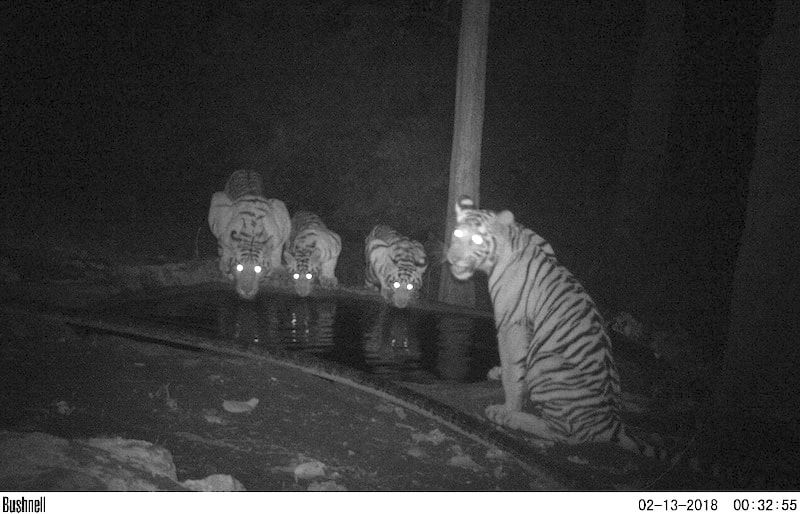 A tigress and her cubs having a midnight drink. This camera trap had an array of infrared LEDs for nighttime photographs. Despite not emitting any visible light, the trap makes a faint whirring noise when a photo is taken and that could be what the tigers are looking at.
Photo Credit: Tara Rajendran

At larger waterholes, the cameras were placed all along the perimeter. This meant that, in many photos, one or more camera traps were visible secured to wooden posts. This setup also gave me photographic evidence of the sheer amount of time the langurs spent fiddling with the camera traps. Monkeys really know how to approach a problem from all angles.

I have photos of them peering into the camera trap from the front and sideways, or even climbing on top of the wooden posts just to bend over and examine the trap from that angle. I used to pull the straps so tight that my hands were rubbed raw, but, just by sheer persistence, they managed to dislodge many a trap, even completely untying a few.

Out of all the animals who inadvertently dislodged my camera traps, only wild boars have my sympathy. While going through some footage recorded during the initial stages of my project, I found a video where there were no animals to be seen, but the camera was swaying gently from side to side.

The mystery was unexpectedly solved a few days later when, while on field, I saw a wild boar enjoying a long leisurely scratch by rubbing itself against the canvas straps wound all along the wooden post. 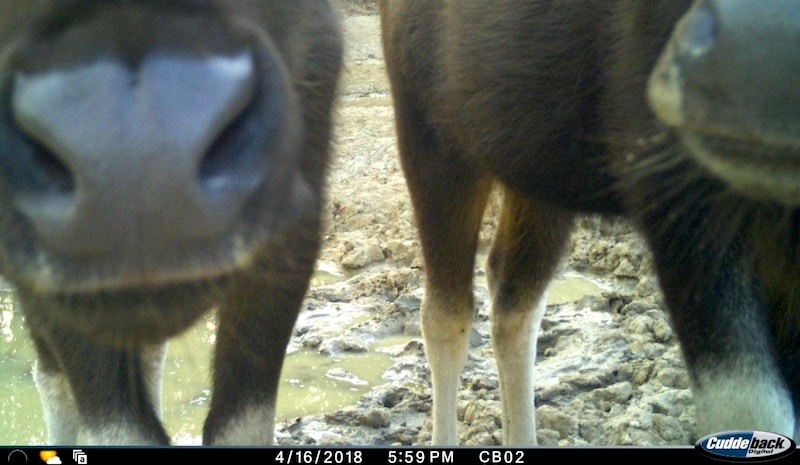 Despite the great photos and funny stories that were an inevitable result of wildlife interacting with the traps, there was always a chance of losing data. The forest guards at Kanha were my guardian angels in this regard. They used to accompany me on my periodic visits to different waterholes and were more than willing to keep an eye out for any displaced camera traps while out on patrol. Many times, they asked me about the various possible settings and were curious about the resulting photos.

When I started my fieldwork, my top concern was making sure I had enough data. In my head, I had a rough plan of the procedure to follow. I knew that the photos had to be organised in a specific manner, and each photo had to be tagged with all the different species present in it. What I had not anticipated was the sheer volume of photographs. By the end of my fieldwork, I had amassed over 1.5 lakh photos.

In sheer panic at the amount of unanticipated work, I spent all my free time tagging photographs over endless cups of tea at the local dhaba. By the end of my third cup, there would usually be a crowd of curious onlookers gathered around to watch. Despite my continuous efforts, I was unable to keep up with the sheer volume of photos pouring in.

In this state of panic, I recruited my parents and fiancé as unpaid labor. I provided them a crash course in identifying ungulates and using the tagging software. It was through their relentless efforts that I was able to stay on schedule. I only realized how far we had all come when I overheard my parents, completely of their own interest, discuss the drinking habits of the barasingha! 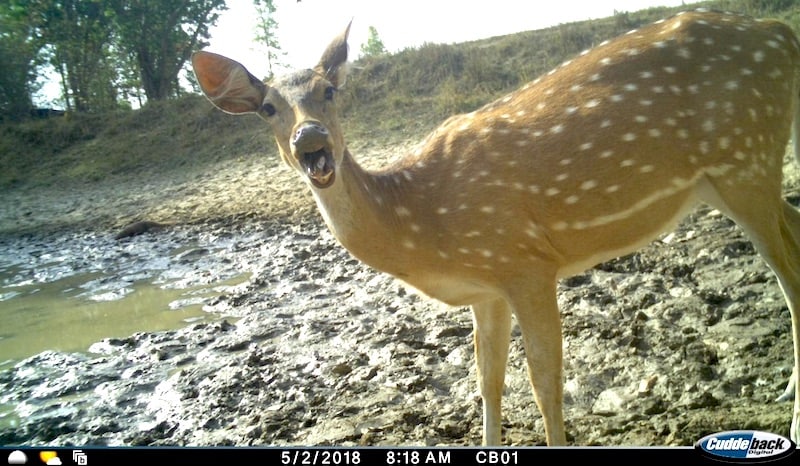 It looks like this chital is saying “Yikes! we’re being watched!”
Photo Credit: Tara Rajendran

Tara Rajendran forayed into the field of wildlife and ecology after she was bored by the unchanging life of an IT professional. After enjoying the wonderful campus life at NCBS which challenged her intellectual and physical capabilities, she recently wrapped up a year long project at WWF India. Some of the most memorable moments of her life are from her fieldwork days spent in the forests of central India. She hopes to get more writing done during lockdown.

This series is an initiative by the Nature Conservation Foundation, under their programme Nature Communication to encourage nature content in all Indian languages. If you’re interested in writing on nature and birds, please fill up this form.

How to find the best deals during online sales? We discussed this on Orbital, our weekly technology podcast, which you can subscribe to via Apple Podcasts, Google Podcasts, or RSS, download the episode, or just hit the play button below.